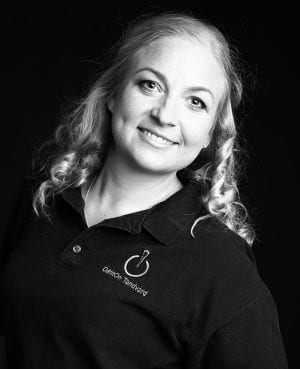 Treatment carried out by Natalie Stevanovic

Dr Natalie Stevanovic qualified in 2000 from the Umeå University in Sweden and has since worked in both general and private practices in Sweden and private practice in Switzerland. In 2013, Dr Stevanovic became practice principal of DentOn Tandvård AB where she provides a range of dental treatments. She has a particular passion for aesthetic dentistry and is a certified provider of both the Inman Aligner and ClearSmile Aligner appliances. Here, she presents her first case using the ClearSmile Aligner, which was selected by the IAS Academy as case of the month.

I became a certified user of the Inman Aligner a while ago, so it made perfect sense to add the ClearSmile Aligner to my armamentarium as well. My first case was a young female who presented to the practice with concerns about her upper central incisors, which were overlapped. She was not an existing patient, but was aware of the practice’s orthodontic services and was interested in beginning treatment as soon as possible.

During the assessment it became apparent that she had misalignment in the lower anteriors as well, which were blocking the palatal movements of the upper laterals, while the overlapping in the centrals had caused deviation in the lower arch. In addition to this, the lower anteriors were all angled to the right and the patient had black triangle spaces between several of her teeth.

Planning took longer than expected during this case, as I was not completely satisfied with the results from the initial Archwize™ simulations and Spacewize+™ calculations in regard to the black triangle gaps, midline and required space. When I received the animated 3D models there was no improvement to the gaps and the midline was not good enough, so I suggested proclining the anteriors, and rotating and moving the canines so the gaps would close. The new guide frm the laboratory provided a much better result, predicting that 1.2mm of space would be required in the lower arch and 1.3mm in the upper arch. Of course, for perfect alignment, 43 would needed to have been moved and angled more, but the patient was made aware that this was not achievable with removable aligners because of the amount of space needed. Redoing the models did delay the treatment in commencing but as planning is integral to achieving safe, ethical and successful results it was a necessary setback. I also made the decision to send the treatment planning paperwork to the patient so that she could see the predicted end result, which took time but again, it was important that she had realistic expectations.

The plan was to use 15 aligners in the upper arch and 21 in the lower arch, followed by the bonding of fixed retainers in both arches and polishing of the incisal edges. The patient consented to all of this and agreed that fixed retainers would be more effective in preventing relapse later on down the line. Before proceeding, the treatment pathway was run by the trainers on the IAS Academy online support platform. The feedback was very helpful, and proved to be an invaluable tool during treatment planning.

Treatment commenced in April and because it was my first case I saw the patient a week after the first aligner was fitted rather than the recommended two weeks. As it happened, the first ClearSmile Aligner was too tight and was causing gingival pain, so I had to adjust the first three aligners myself and send back the next three to the laboratory to be altered accordingly. After this I saw her on two occasions with one week in-between then I saw her three weeks later for the sixth aligner.

Up until that point the treatment was progressing as planned, but when it came to the seventh aligner it did not fit correctly, so I took new impressions and sent them off to the laboratory. This caused a further delay of five weeks, because instead of continuing as planned at home with the next set of aligners during the summer, the patient had to wear the seventh aligner through the whole of June. It wasn’t until the start of July when the new aligners and Archwize™ models were received from the laboratory that treatment recommenced. The patient was then seen two weeks later and again at the beginning of August. Usually, the practice is closed during this time, but an exception was made for the patient in this instance.

By the end of September treatment in the upper arch was complete and the retainer was bonded. The lower arch was finished shortly after, and following the bonding of the fixed retainer, bleaching trays were used for 10-12 days at night time. The patient was recommended to use for 14 days, but this had to be reduced as they had a negative impact on her sleep. To finish, the incisal edges were polished.

Despite the setbacks both the patient and I are very pleased with the results of the case. Not only were both arches successfully aligned and the midline improved, but the black triangle spaces had not worsened, which was one of my main concerns pre-treatment. Moving forward, I will endeavour to schedule commencement of cases after the summer to minimise the risk of delays reoccurring. 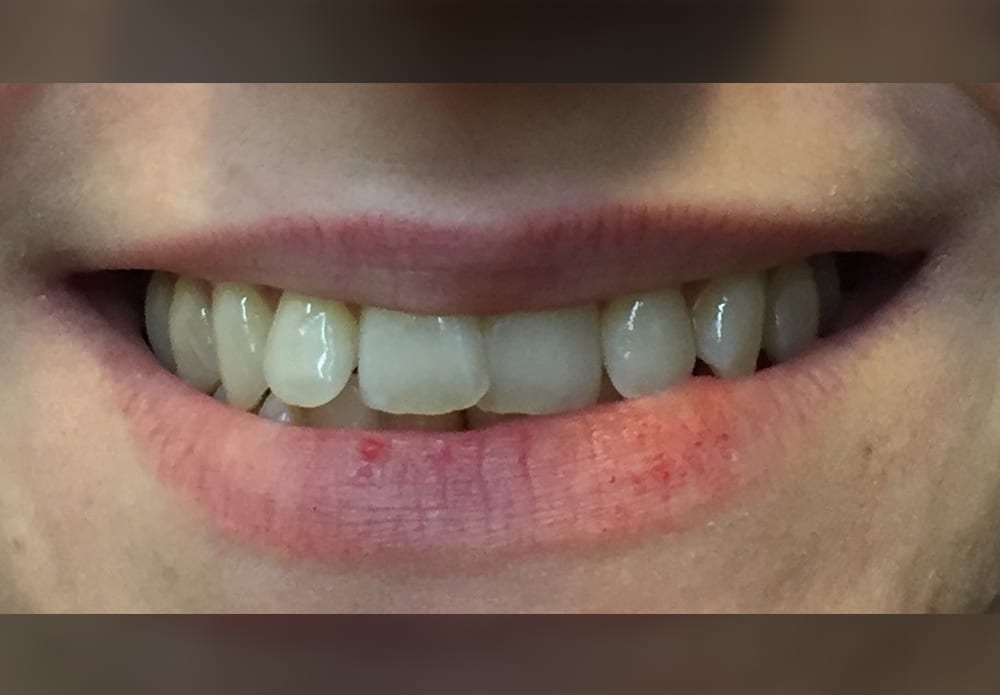 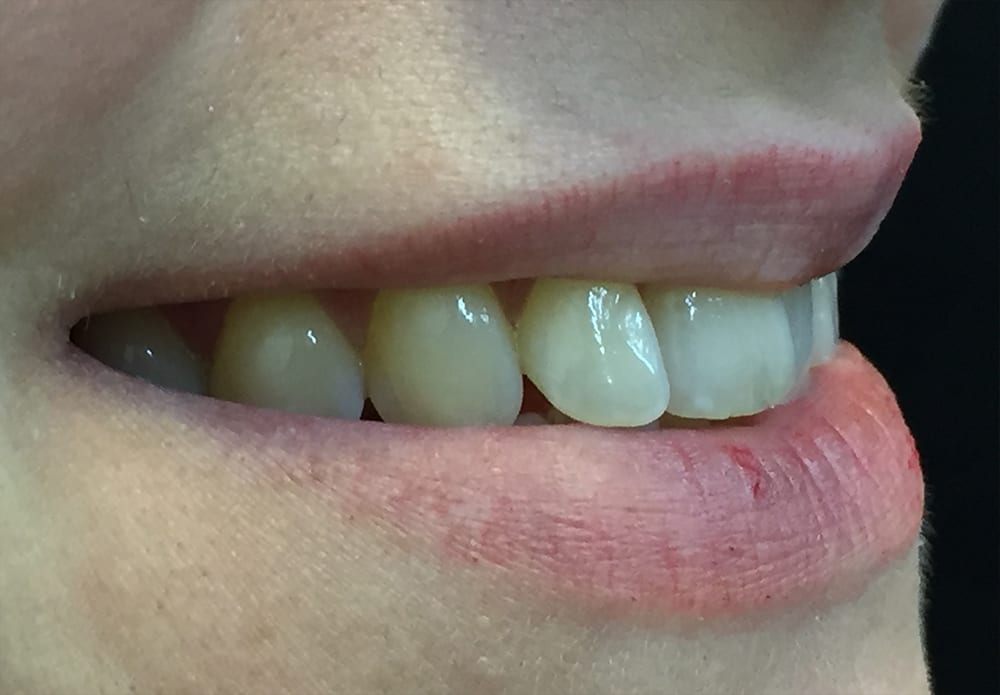 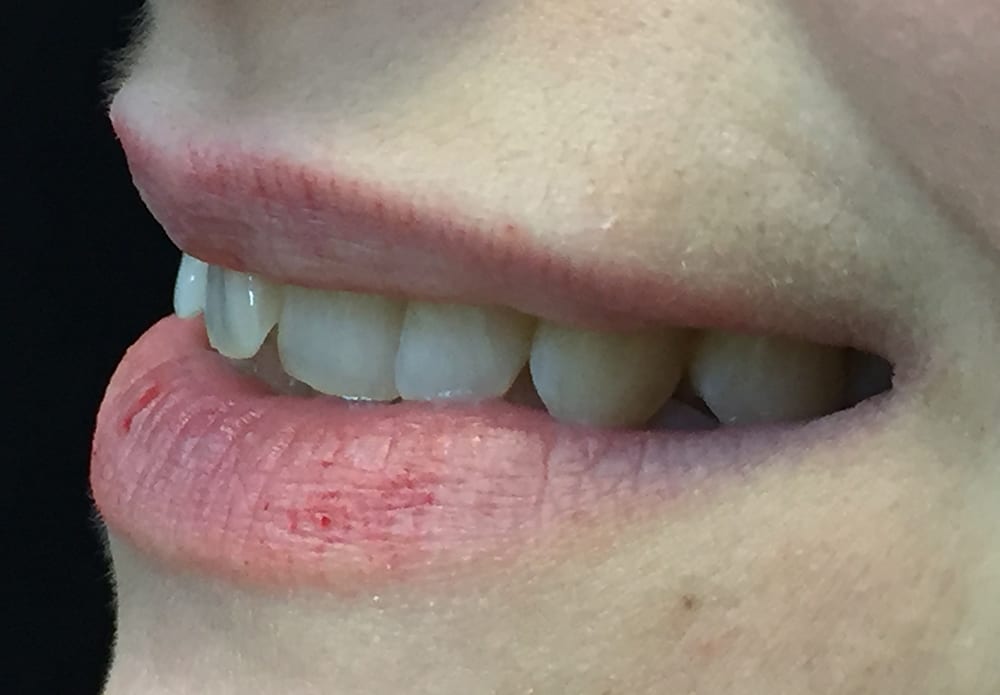 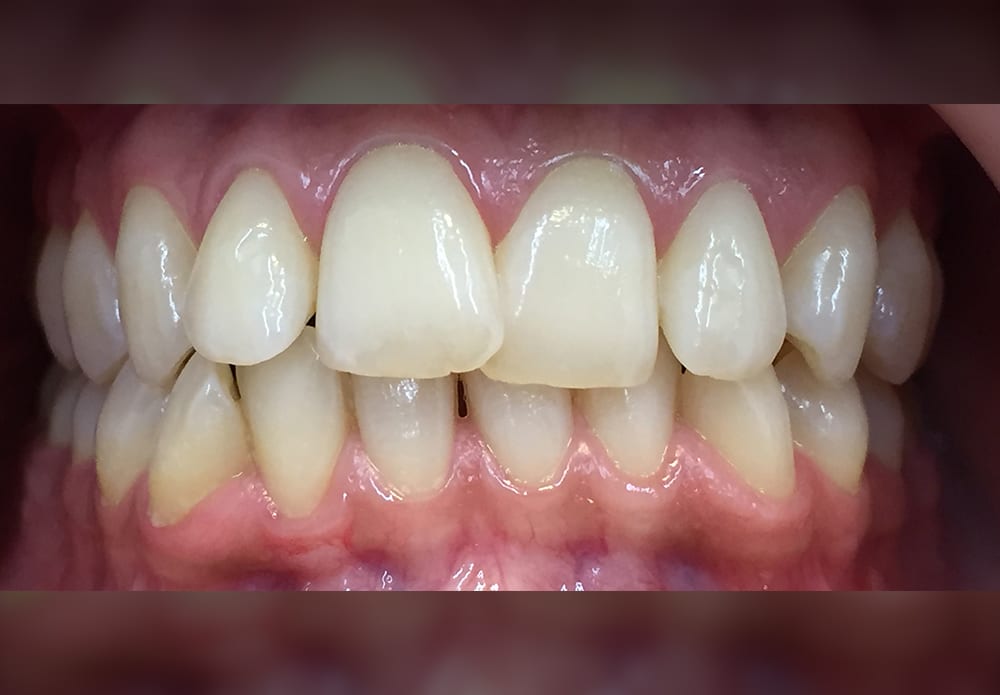 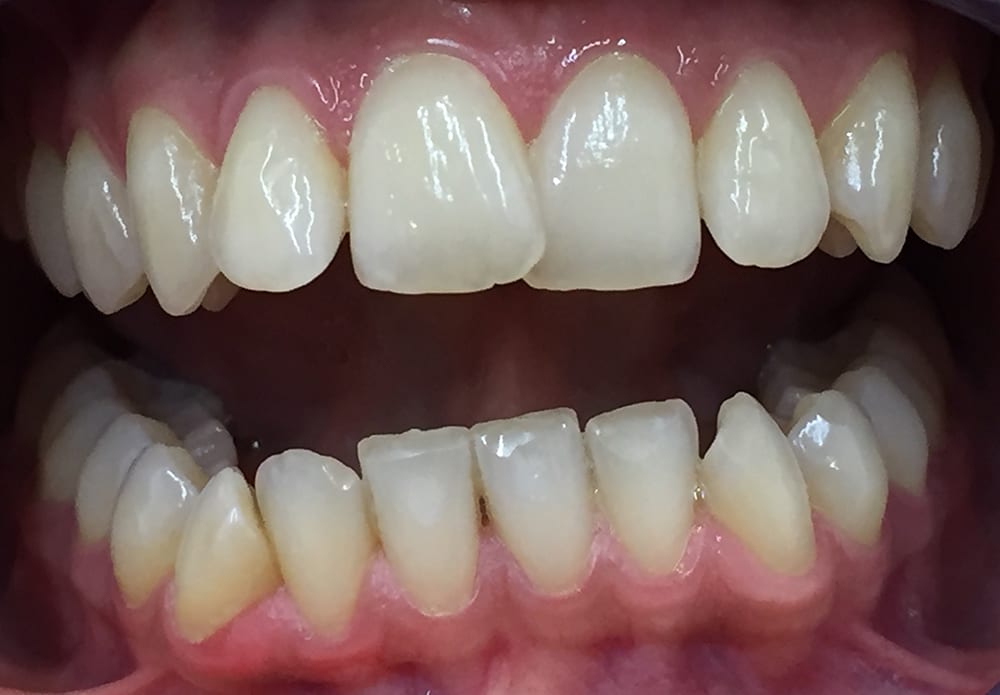 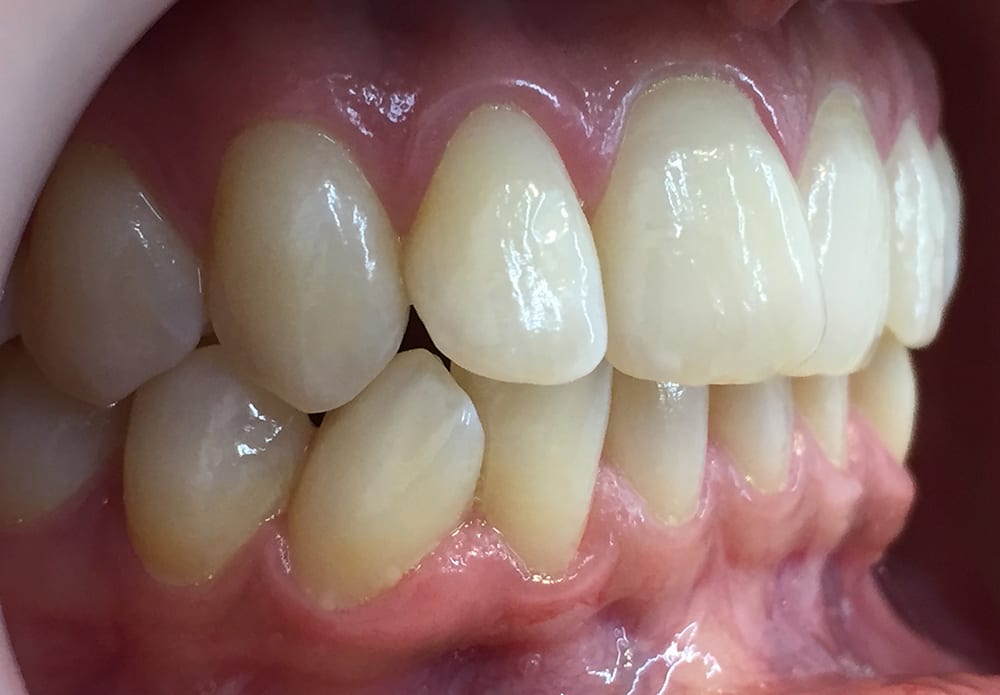 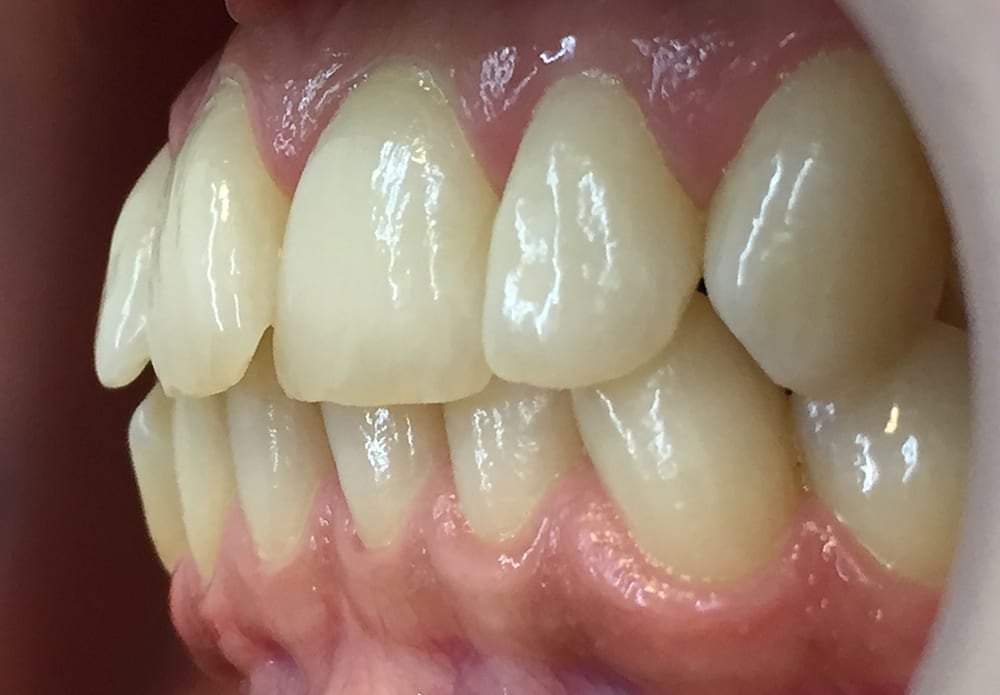 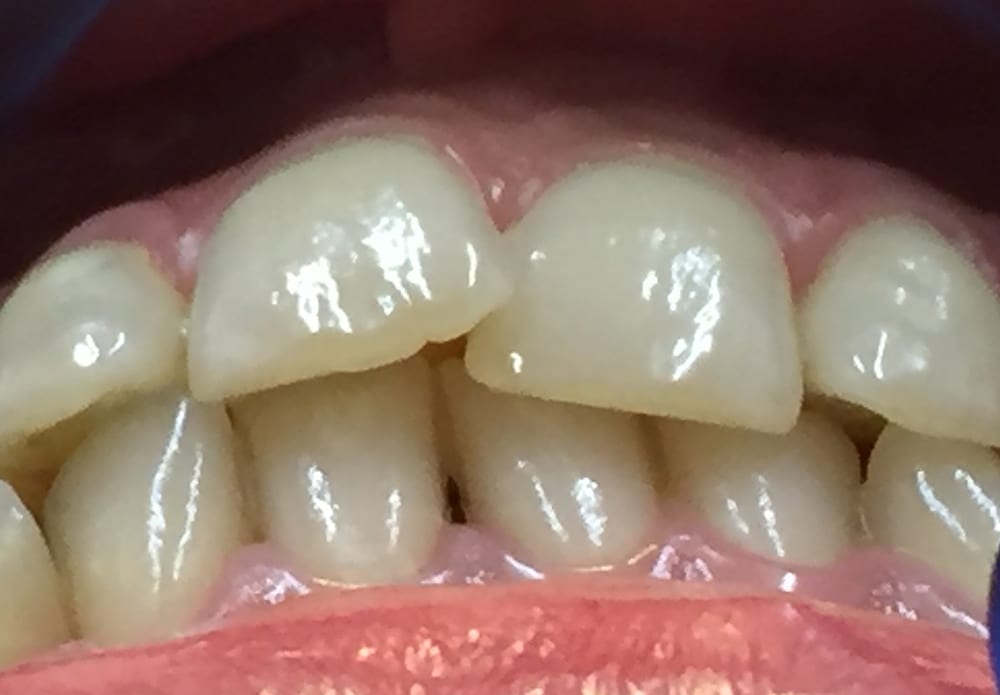 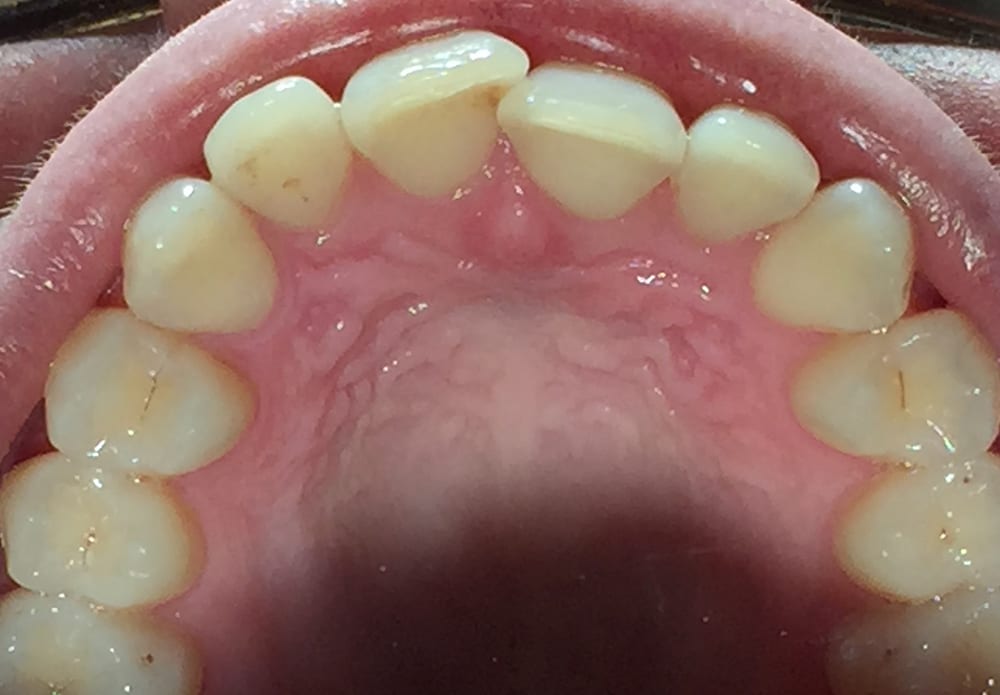 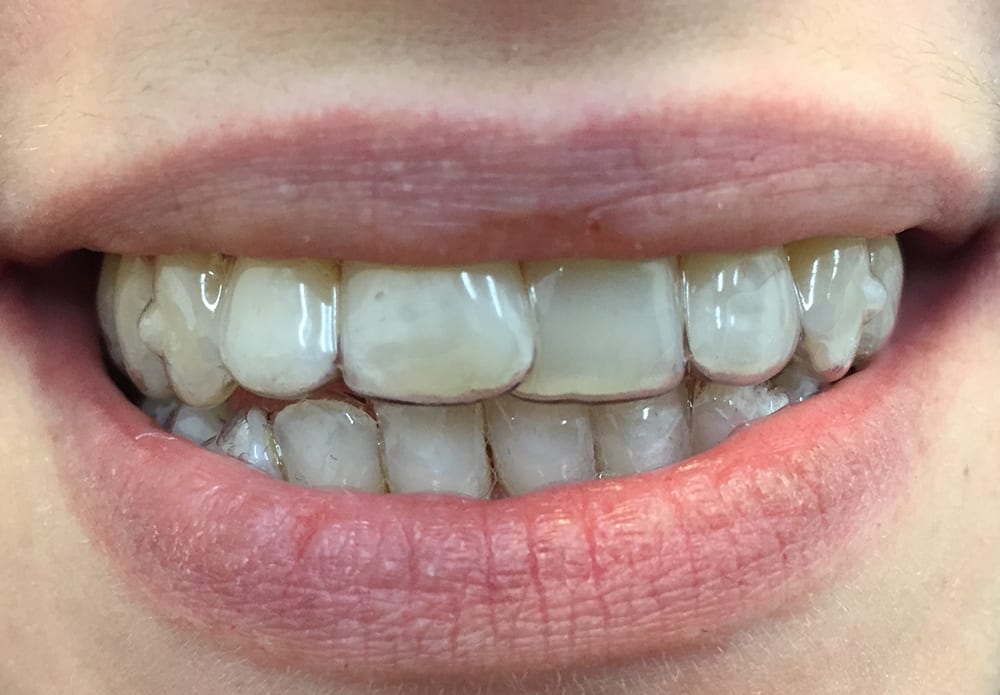 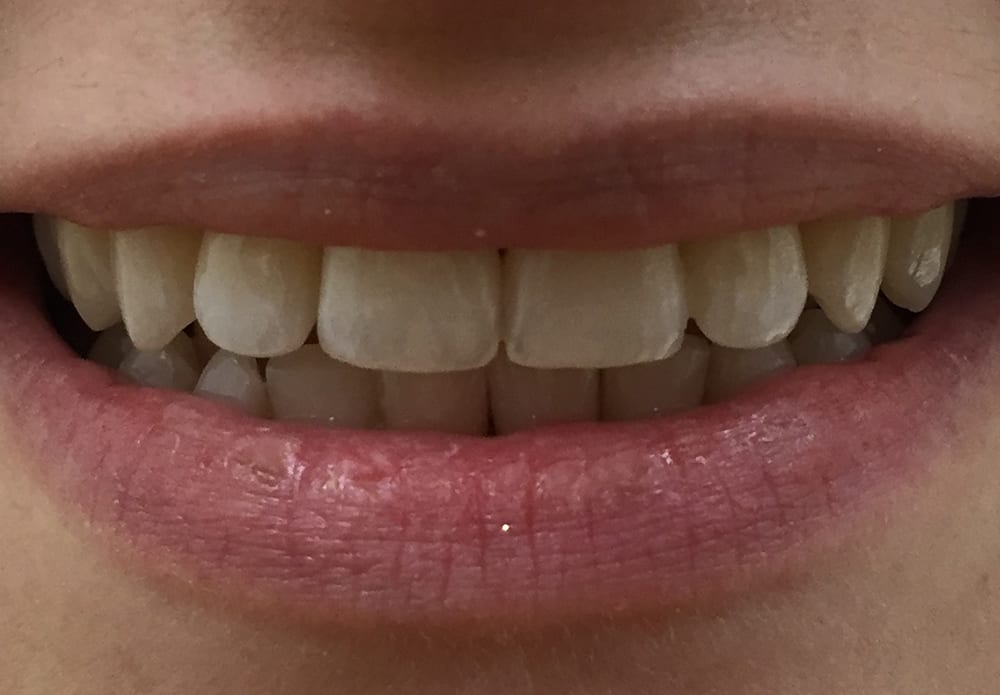 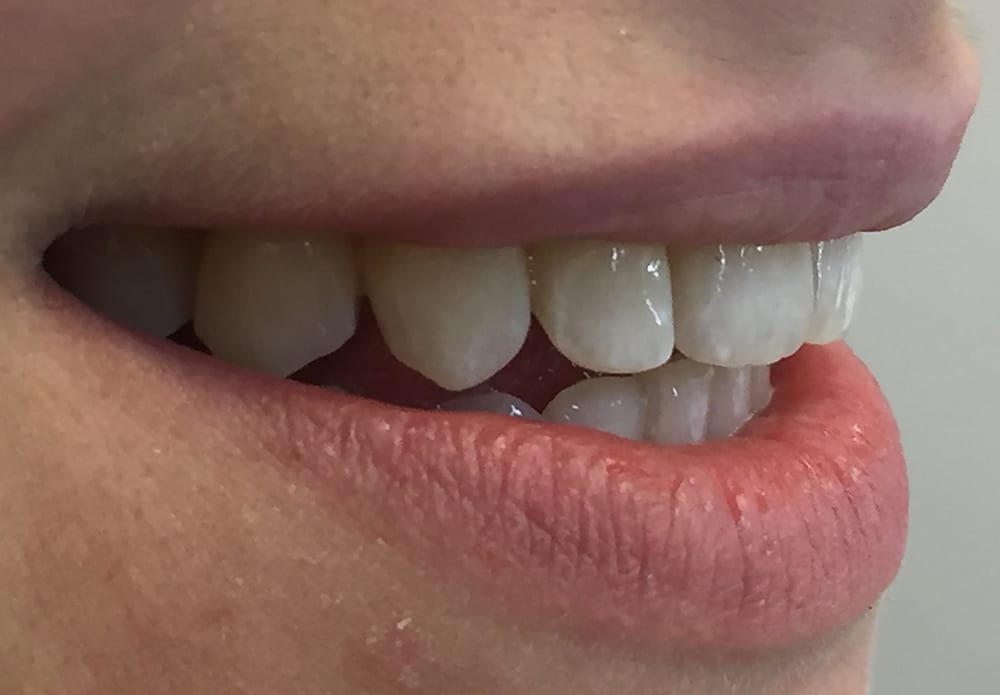 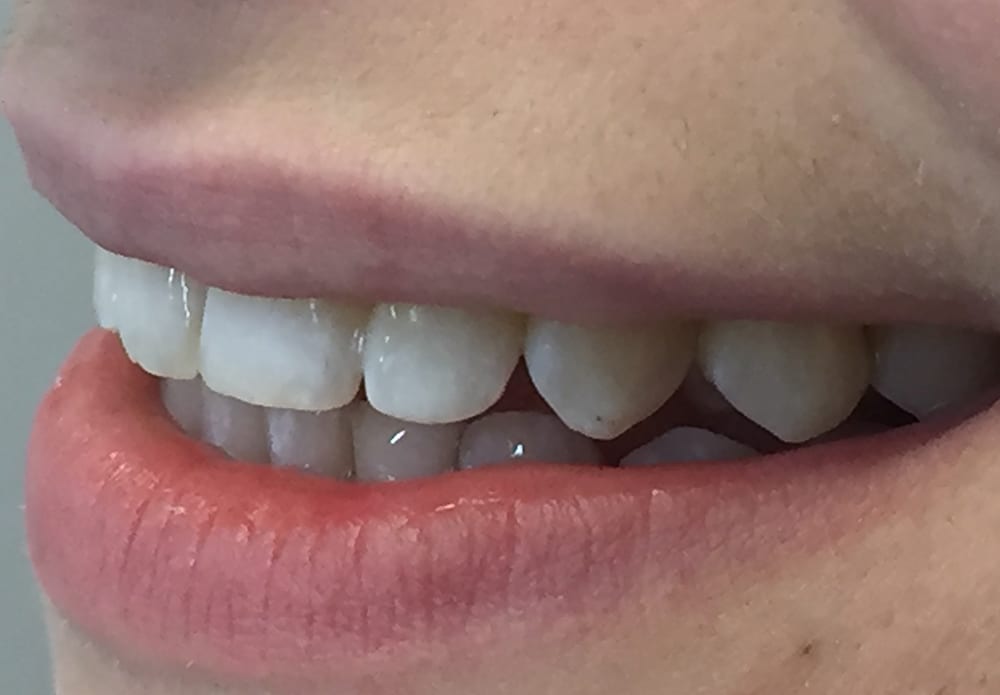 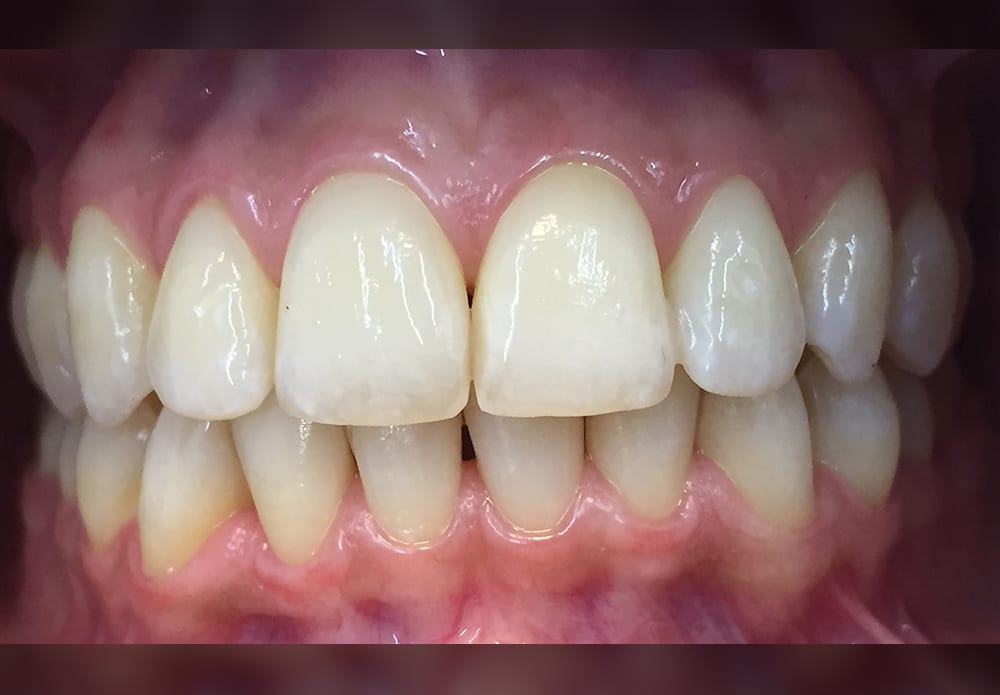 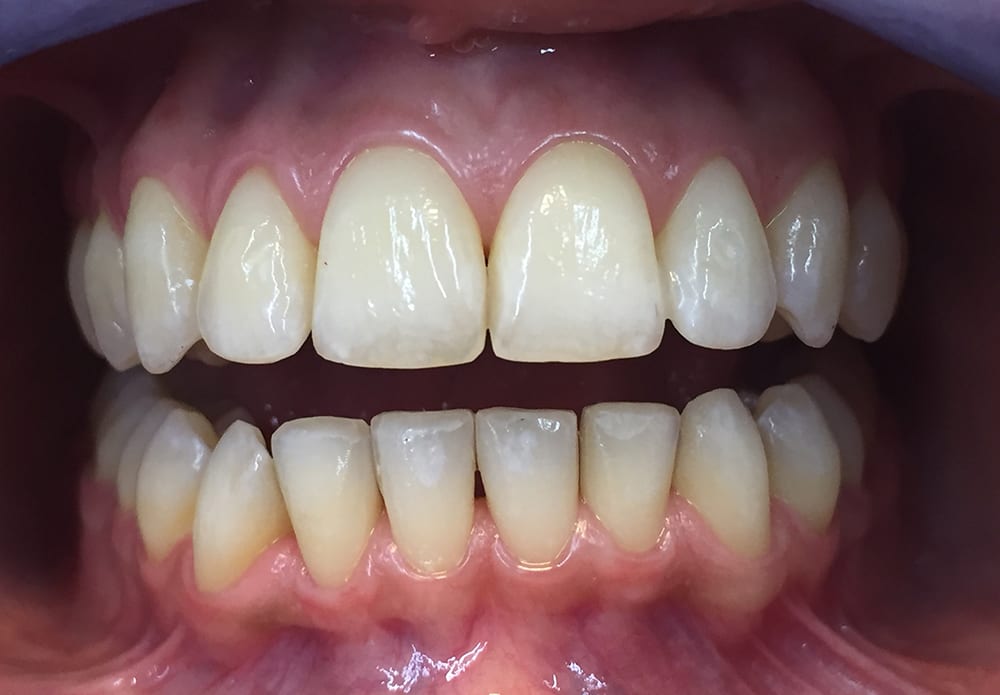 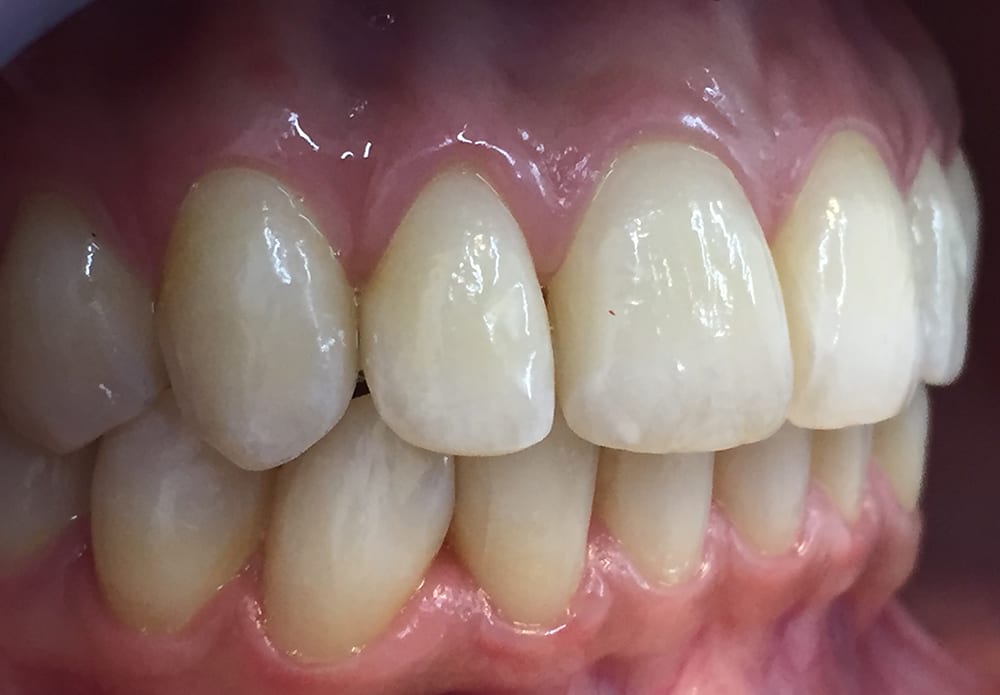 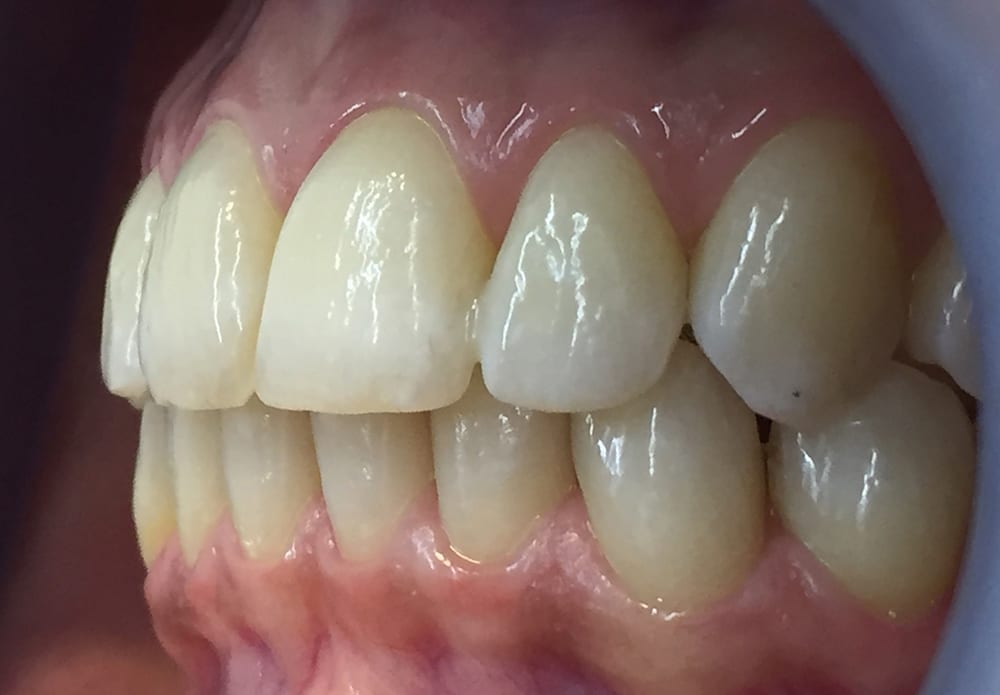 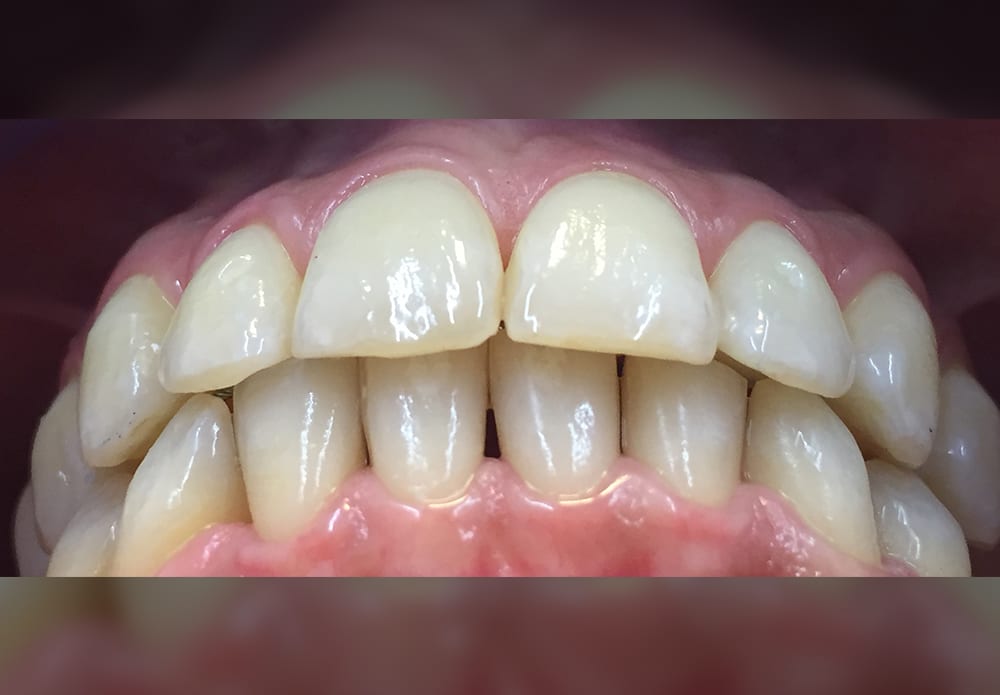 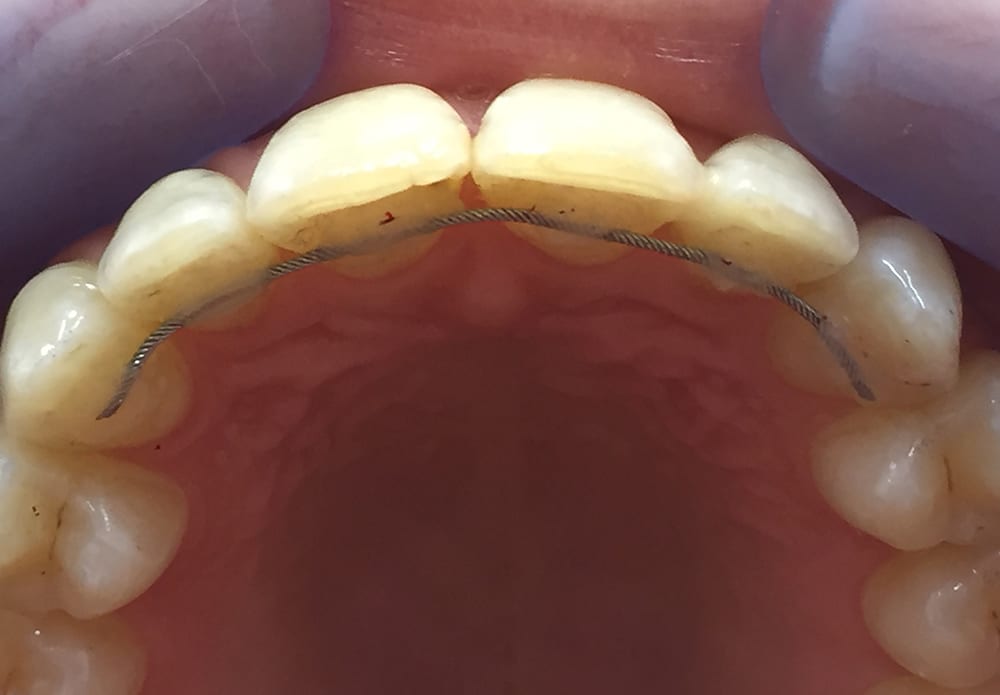 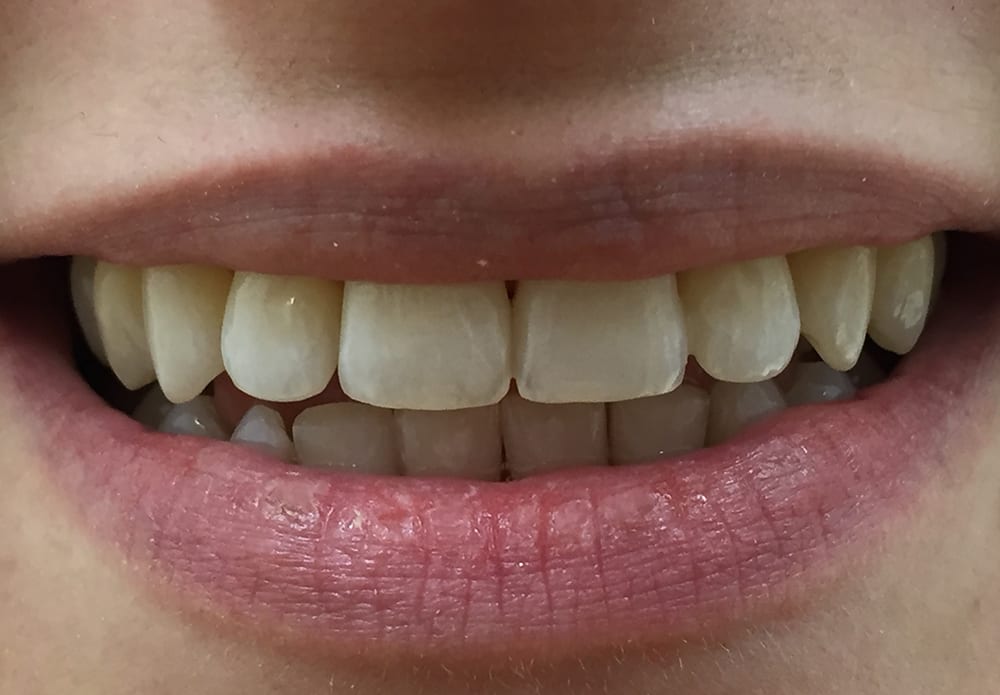