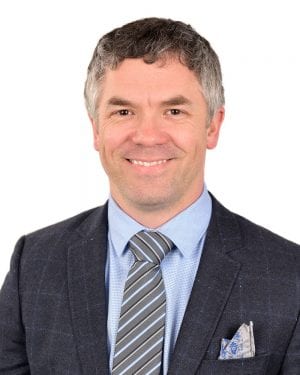 Treatment carried out by Andrew Wallace

Andrew is a general dentist with special interest in prosthodontics, orthodontics, aesthetic and restorative dentistry. He gained his Master of Clinical Dentistry (MClinDent) in Prosthodontics from King’s College London in 2015 and gained full Membership of the Faculty of General Dental Practice (MFGDP) for the Royal College of Surgeons England also in 2015.
Andrew is one of the partners in Bachelors Walk Dental and has been since 2004..
Andrew Lectures internationally on cosmetic dentistry, including cosmetic tooth alignment and tooth whitening, and is a trainer, mentor and lecturer for IAS the Academy. Andrew was one of the first dentists in Ireland to use the Inman Aligner in 2008 and has been involved in the training side since 2011.

The patient was referred by a colleague as she was unhappy with the colour and crowded appearance of her the upper and lower teeth whiter. She had previously been told that she was only suitable for metal braces, which she had been considering for more than a year, but she was now getting married in 13 months’ time.

Since correction of the midline, canine relation and molar cross bite would likely require extraction of four premolars – which could push treatment beyond the patient’s wedding – cosmetic correction of the anterior teeth was chosen.

Regarding appliance, models were used to explained the pros and cons of the various appliance types:

The patient wanted something discrete, but the amount of lower crowding made alignment with clear aligners or lingual appliances challenging. A fixed lingual upper appliance and lower labial ceramic appliance (ClearSmile Brace) were selected so as to get the best possible result in as discrete a manner as possible. The need for lifetime retention was emphasised.

The colour of the teeth was then discussed; in particular, the white mottled patches within the enamel and the possible need for restoration or resin infiltration to treat these.

The amount of space required was calculated using the online Spacewize™+ tool, calibrating photos of the teeth to ensure that space creation was not above the safe maximum. An intraoral scan was also taken using the CEREC Omnicam and the CEREC ortho software, and sent via the connect portal to the IAS ClearSmile lab.

A few days later the Archwize™ was returned by the lab. This digital preview of the case allows easy comparison of the expected outcome with the starting position and calculates the exact space creation required. Since the patient was keen to get started (it was now several weeks since her initial assessment) this was approved quickly and the lab proceeded to fabricate the upper and lower digital indirect bonding trays.

At the fit appointment, the Archwize models and possible compromises were discussed, specifically looking at the crossbite, potential for black triangles and gingival margin discrepancies.

The upper lingual brace was fitted first to allow the patient to better acclimatise to the lingual braces and to start rounding out the upper arch so as to avoid an edge-to-edge incisal position at any point, given the greater space creation required on the lower arch. The upper lingual appliance was indirectly bonded inserting a .010 NiTi wire into the self-ligating brackets.

Four weeks later, the lower labial 3M ceramic brackets were indirectly bonded. The LL1 was not bonded as it was impossible to optimally position the bracket, so the lab did not include this in the indirect bonding tray. IPR and PPR were carried out on the lower arch and the lower .012 wire was lightly tied in to limit proclination. PPR involves slimming down the teeth by reducing the bulbosity by a predetermined amount using composite polishing discs – in this case Kerr OptiDiscs.

After another four weeks, the upper .010 NiTi wire was replaced with a .013 wire and more IPR and PPR were performed on the lower arch involving the premolars. The premolars were long tied to the molars, as there was still insufficient space to consider addressing the lingually placed LL1.

After a further four weeks, a .014 lower wire was fitted, more IPR and PPR were carried out and a powerchain “chicane” was fitted using a bonded lingual button on the LL1 along with an open coil spring to start moving the LL1 into position. This was left until now to avoid unwanted proclination of the lower labial segment, as would be the case if this was tried without creating space via IPR.

Over the next few months, a 20×20 lower NiTi wire was placed with continued IPR.

Within seven weeks, the lingually placed LL1 was labial enough to allow direct bracket placement and ligation to the .016 NiTi wire. A .016 TMA wire was placed in the upper arch with custom bends placed with the wire in situ to finish aligning the upper teeth.

Two months away from the wedding and seven and a half months into treatment, planning for debonding began. It was accepted that the lower arch and possibly the upper would not be completely finished prior to the wedding. Final movements would be achieved with clear refiners, removable retainers were organised and Philips Zoom chairside whitening prepared.

Four weeks away from the wedding, the patient was happy with the upper arch and the lower arch was almost complete, so another CEREC ortho scan was taken for the upper fixed retainer.

The patient was debonded three weeks later, the upper fixed retainer was fitted, impressions were taken for temporary upper and lower vacuum formed retainers (VFR) and the patient returned two days later for whitening. She had been instructed to use GC tooth mousse to help reduce the visibility of the white patches.

Following the wedding, the patient returned for the fit of the three lower clear refiners, each one worn for 7-10 days. CEREC ortho scans were taken for fixed and removable retainers on the lower and a new removable retainer on the upper.

The patient and I were exceptionally pleased with the result, even though the lower teeth were not 100% finished for the wedding.

With any compromised treatment plan in orthodontics it is important to understand and plan for full correction of all issues so that you can better relate to the patient the compromises involved with the alternatives.

The upper arch seemed to stall when just using the standard wires in the self-ligating narrow brackets: to get to the final result required, small detailing bends in the beta-titanium wire were needed. This wire is easy to bend and just the ligature directors were used with the wire in place. The alterative would have been to finish in clear refiners.

The IPR load was very high on the lower arch and without pre-measuring and pre-planning, the patient could have slipped into a reverse overjet.

The lower gingival margins are not totally level at completion, because we chose to level the incisal edges in this case. Direct bracket placement on the LL1 was also a little too gingival, which resulted in the LL1 sitting slightly high. This shows the importance of accurate bracket placement, and the value of indirect bonding for less experienced practitioners.

There has been slight buccal tipping of the upper first premolars, which, at this point, I cannot explain and only noticed on review of the images. It is possibly due to my having manually bent the final beta titanium wire and having placed an insufficient in-step bend.

I would like to thank Professor Ross Hobson and Dr Darren Cromey for their help in the execution of this case. 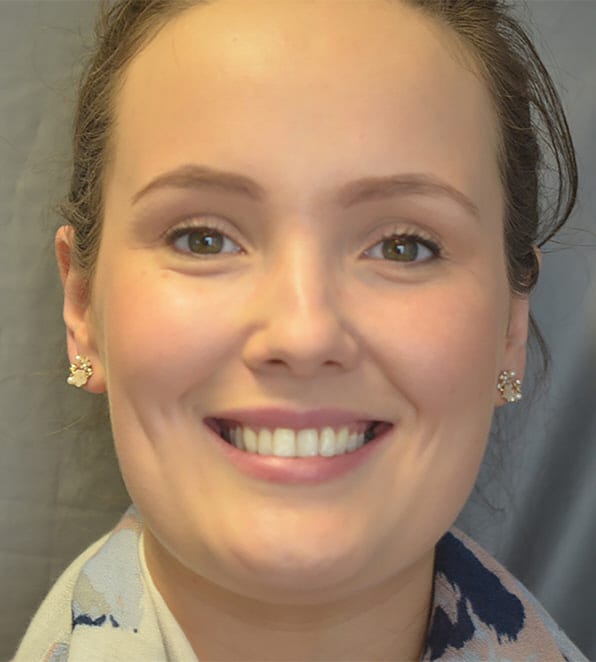 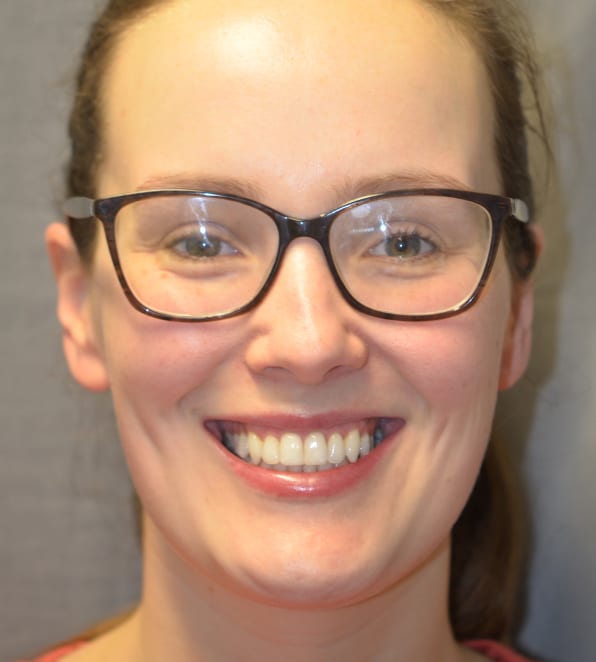 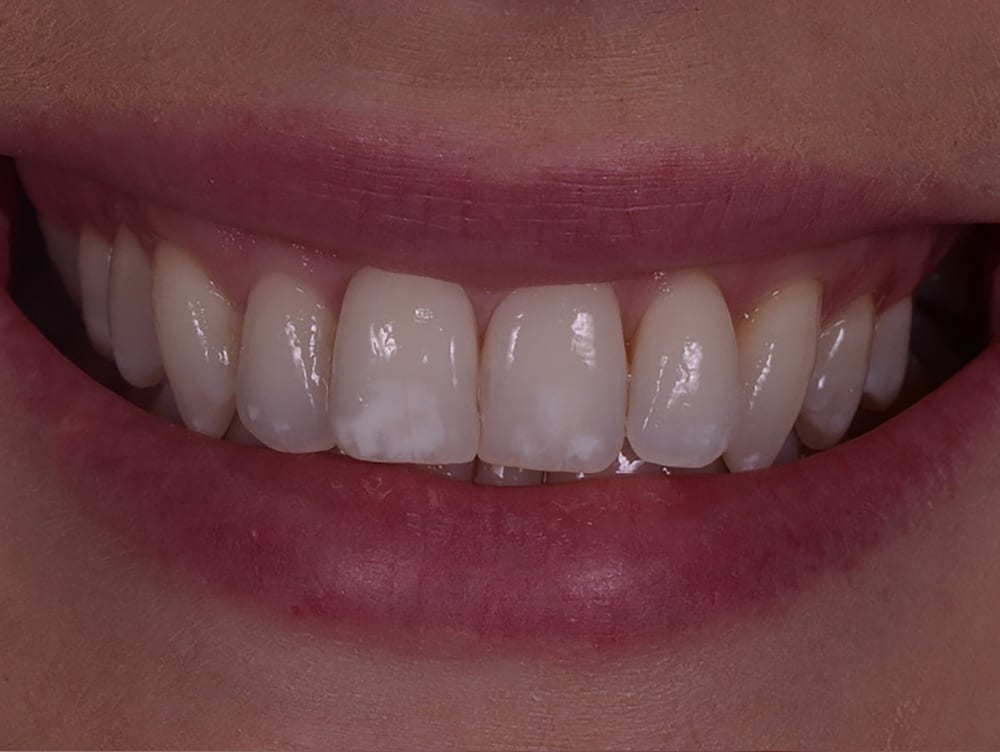 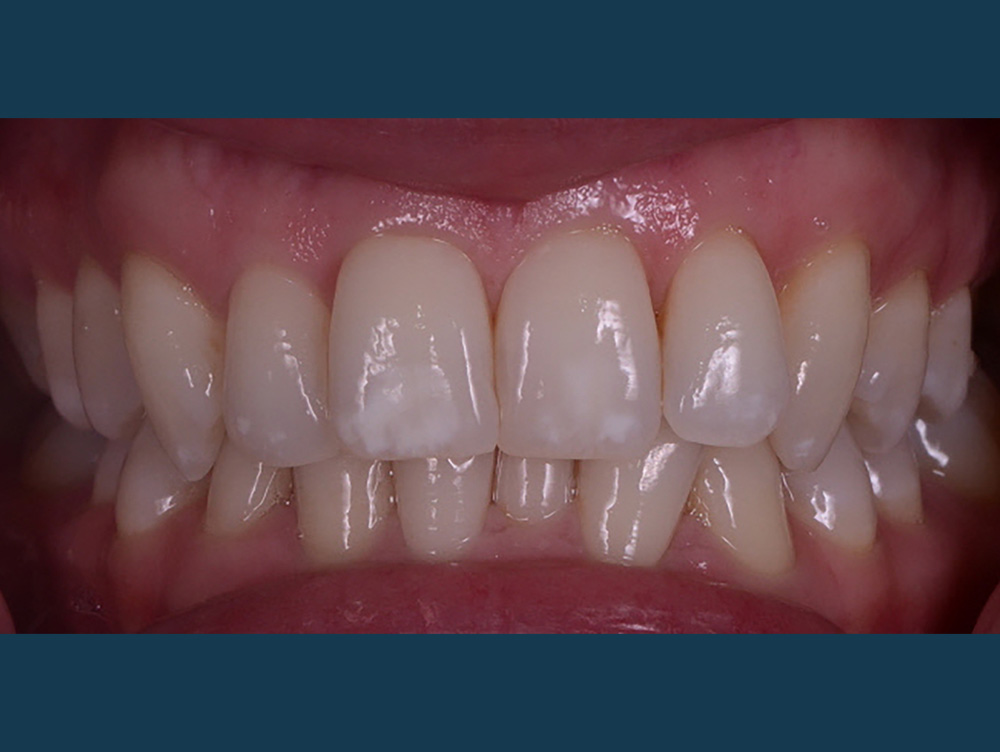 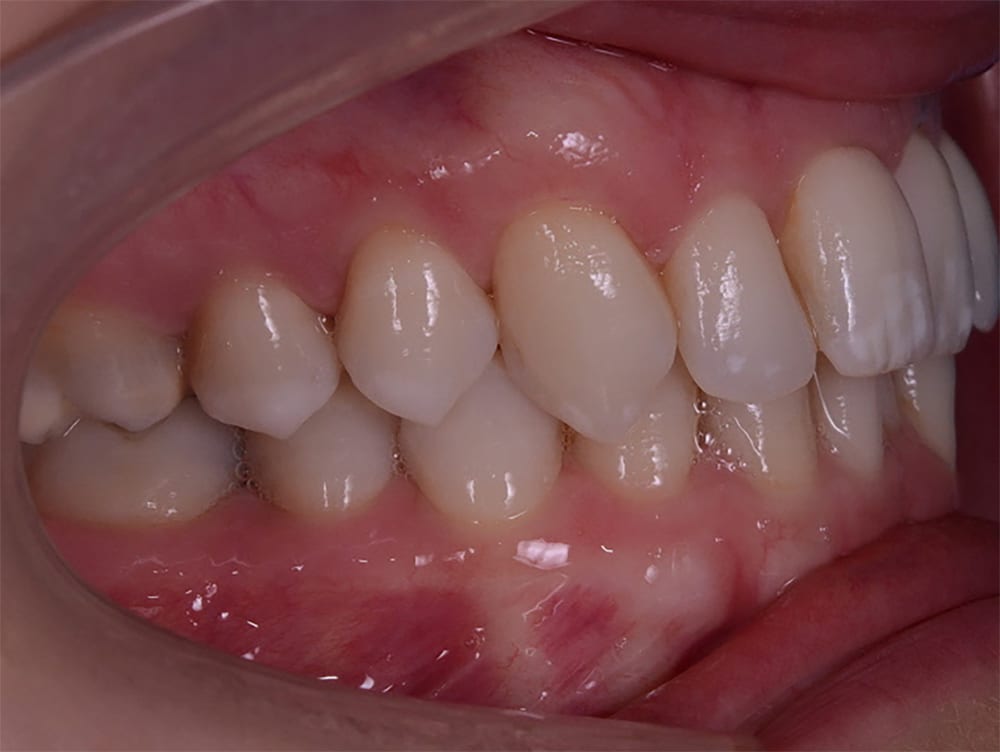 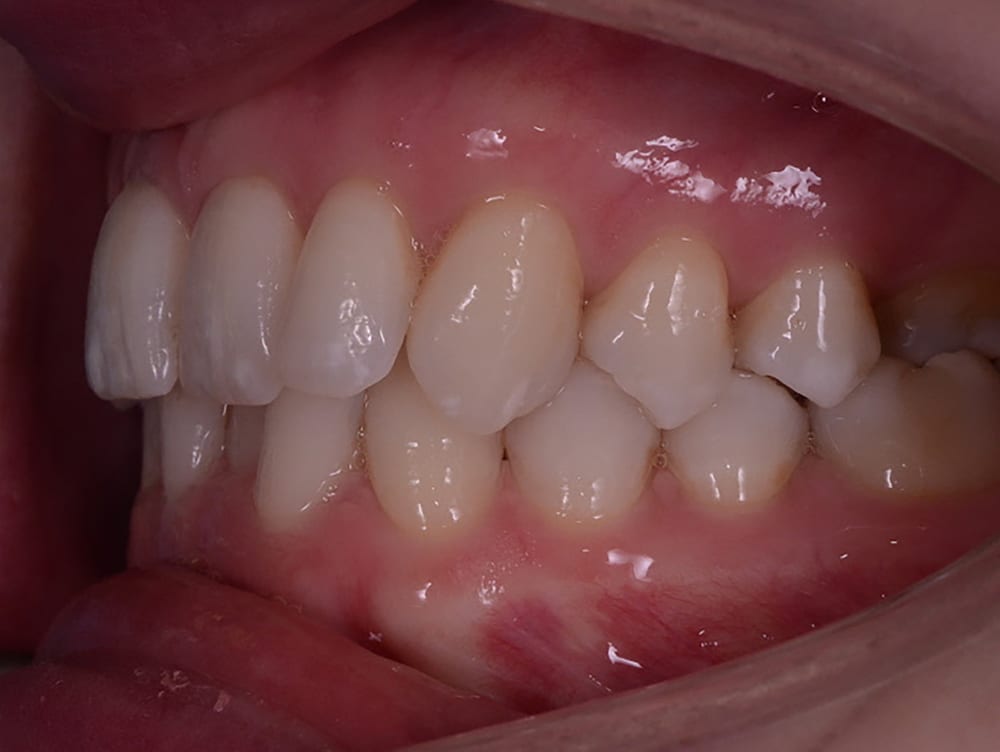 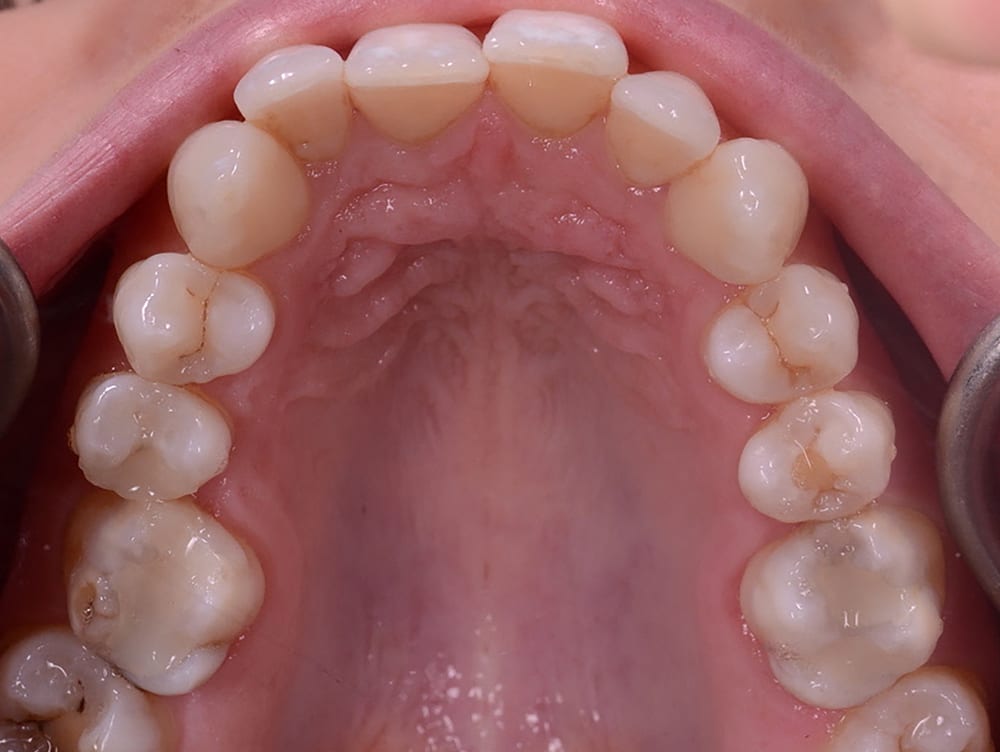 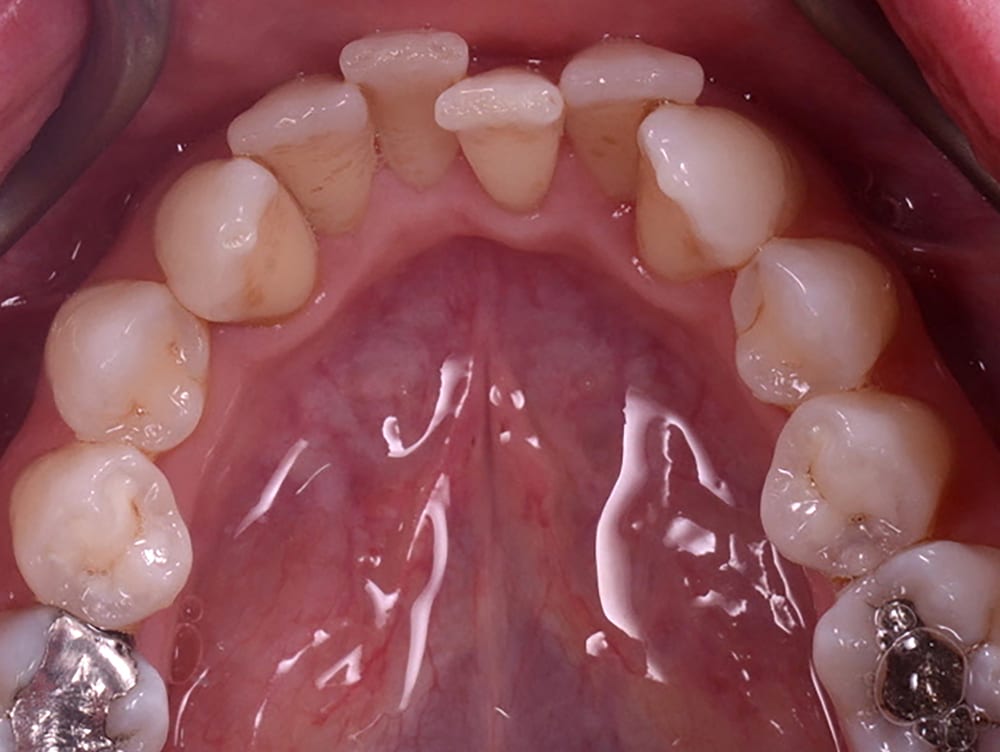 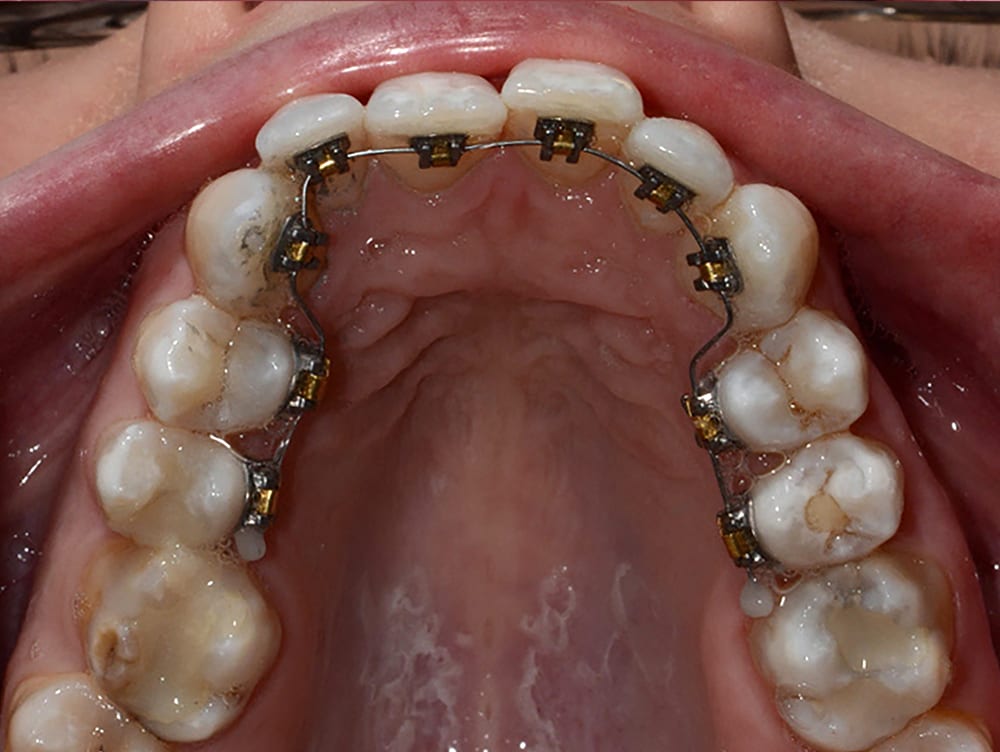 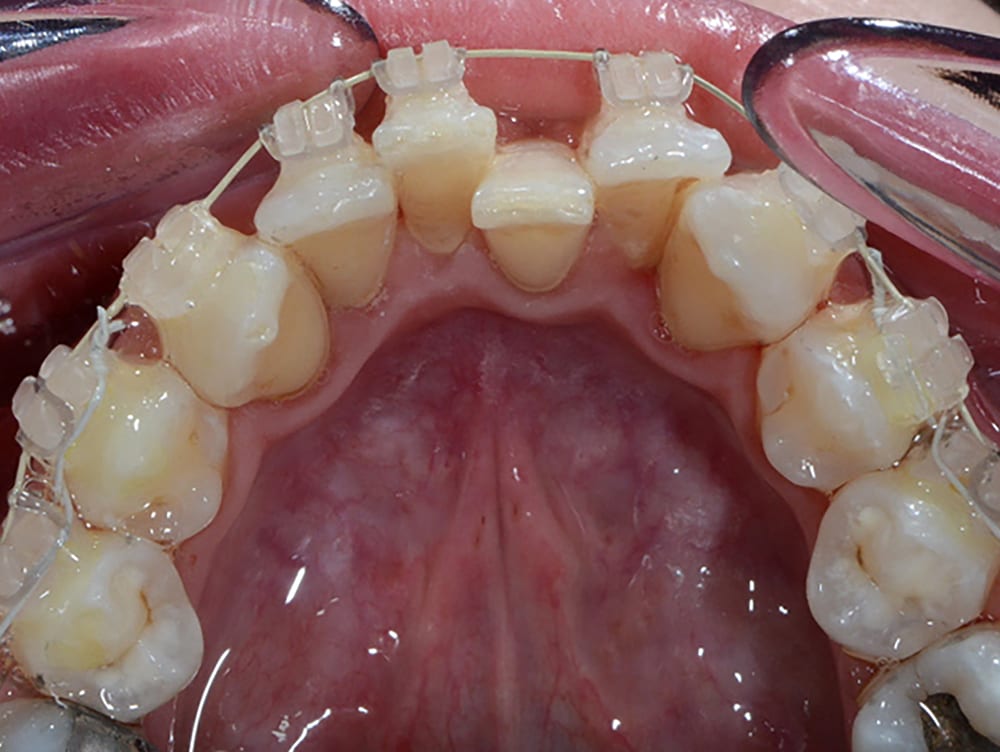 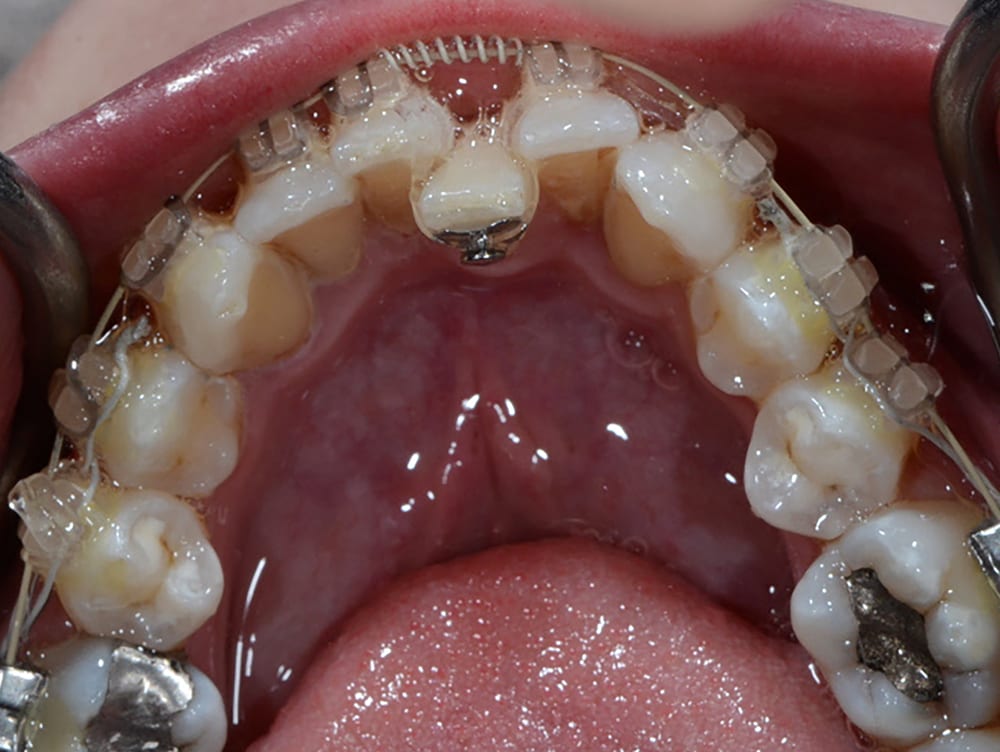 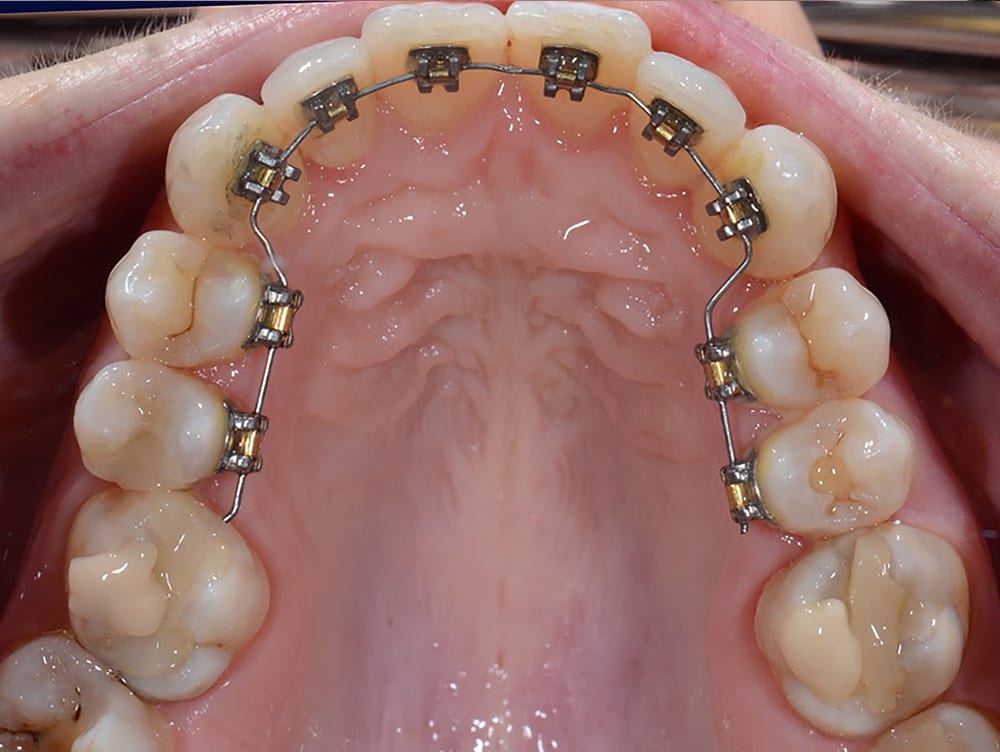 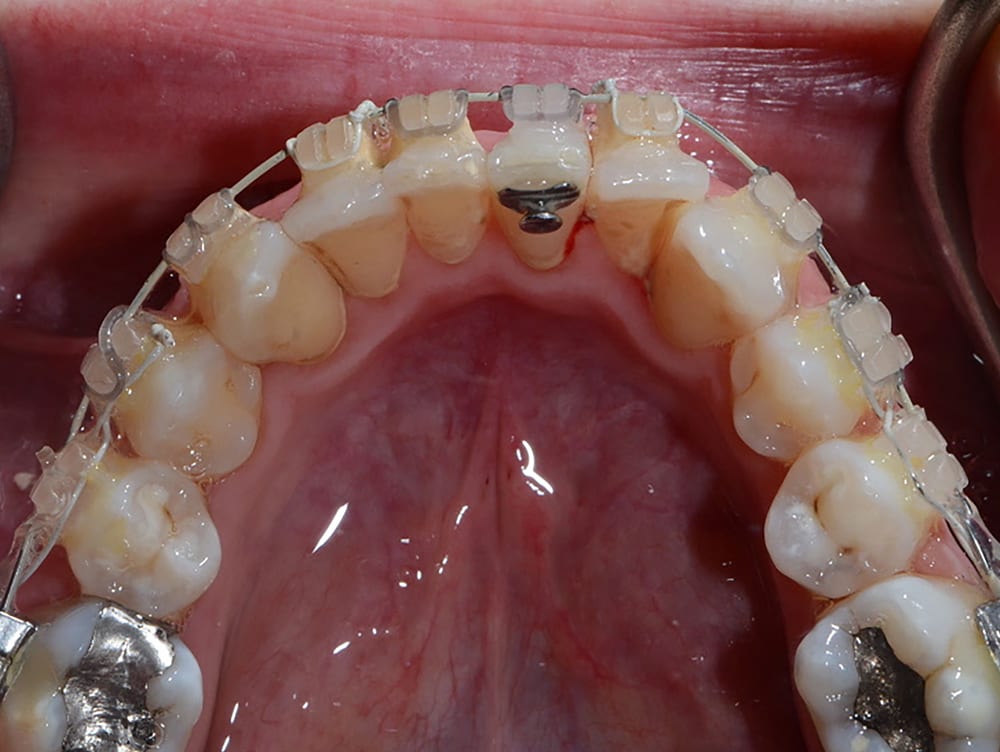 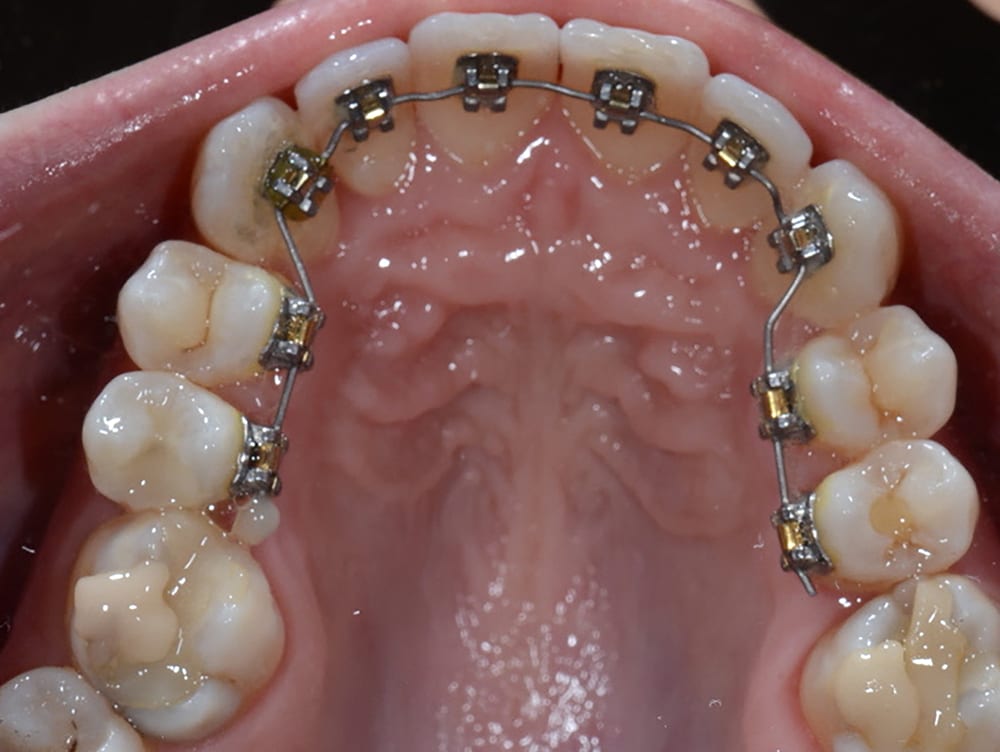 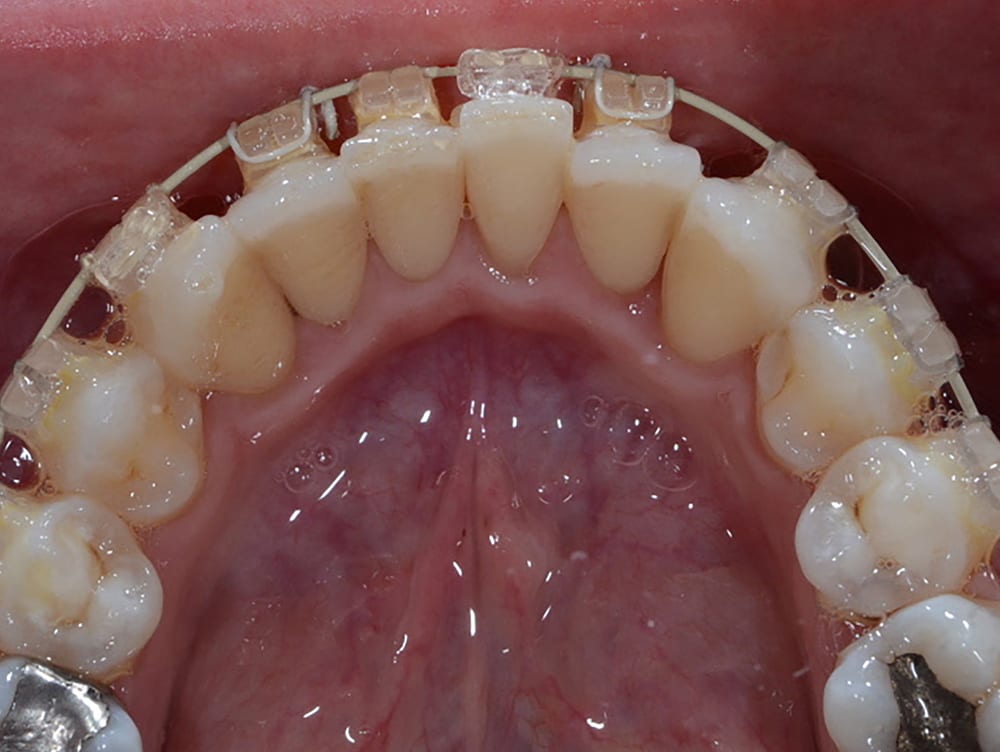 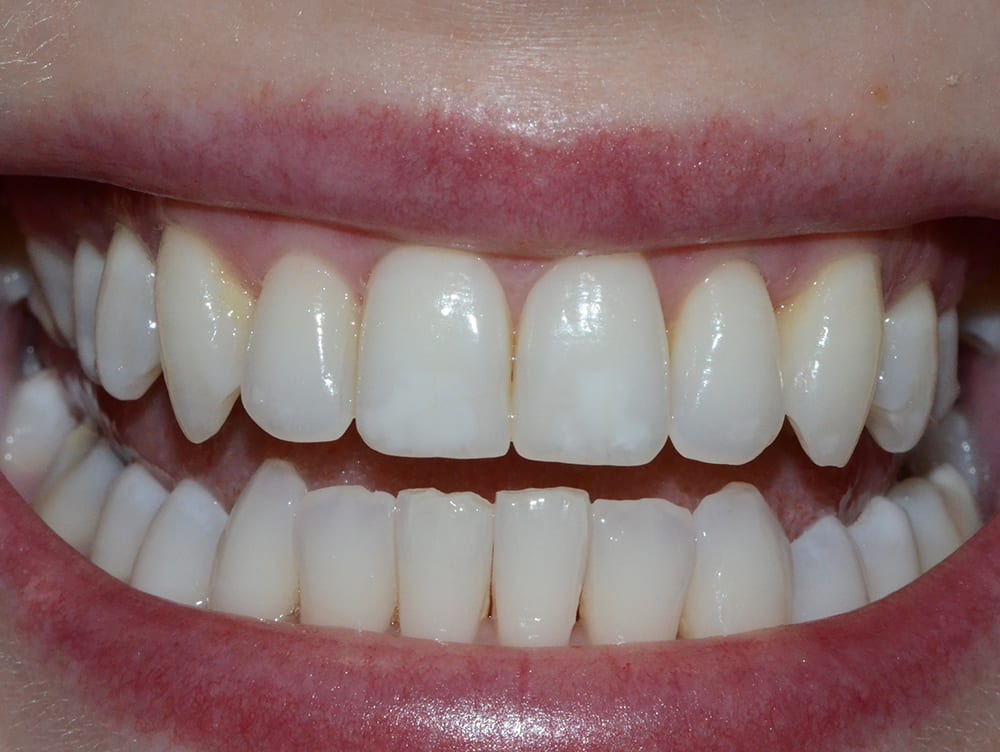 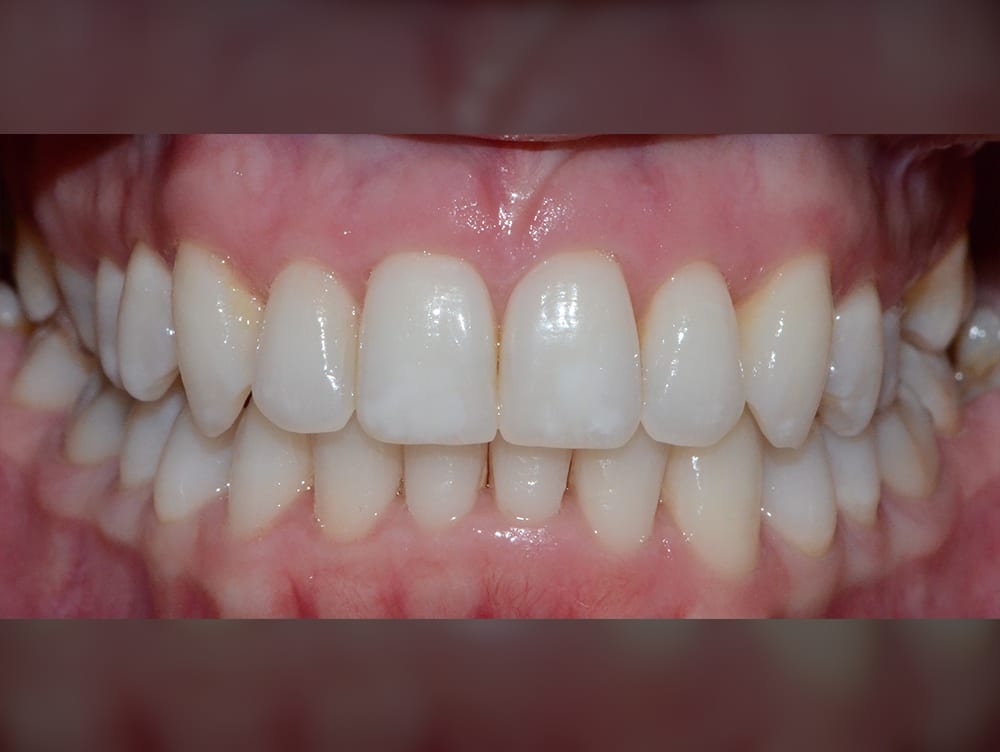 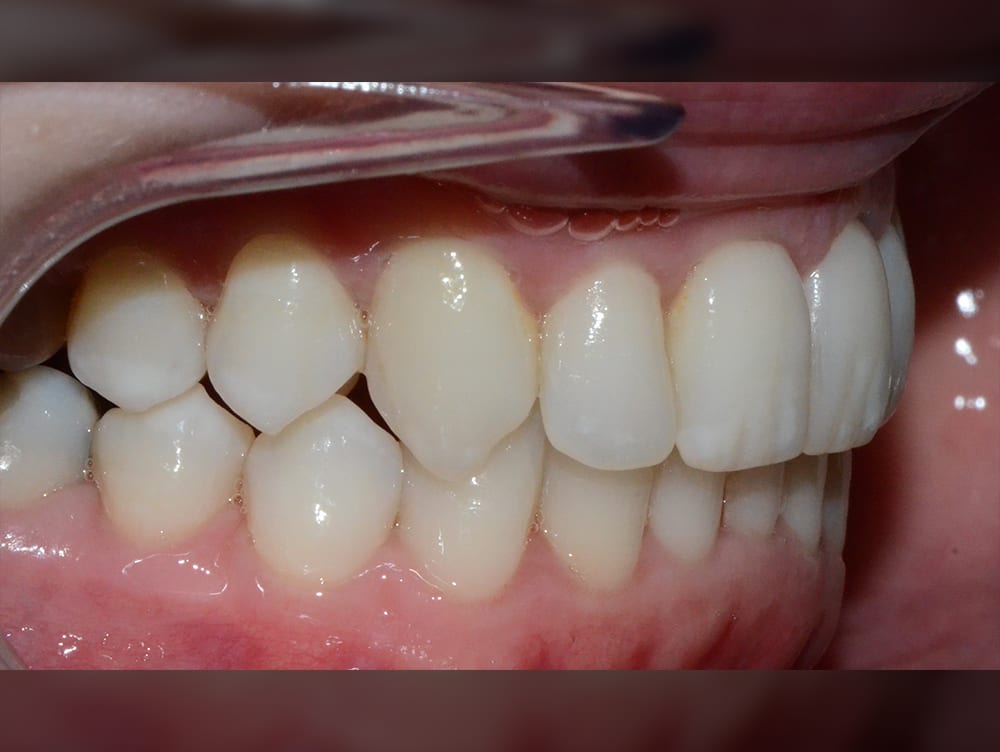 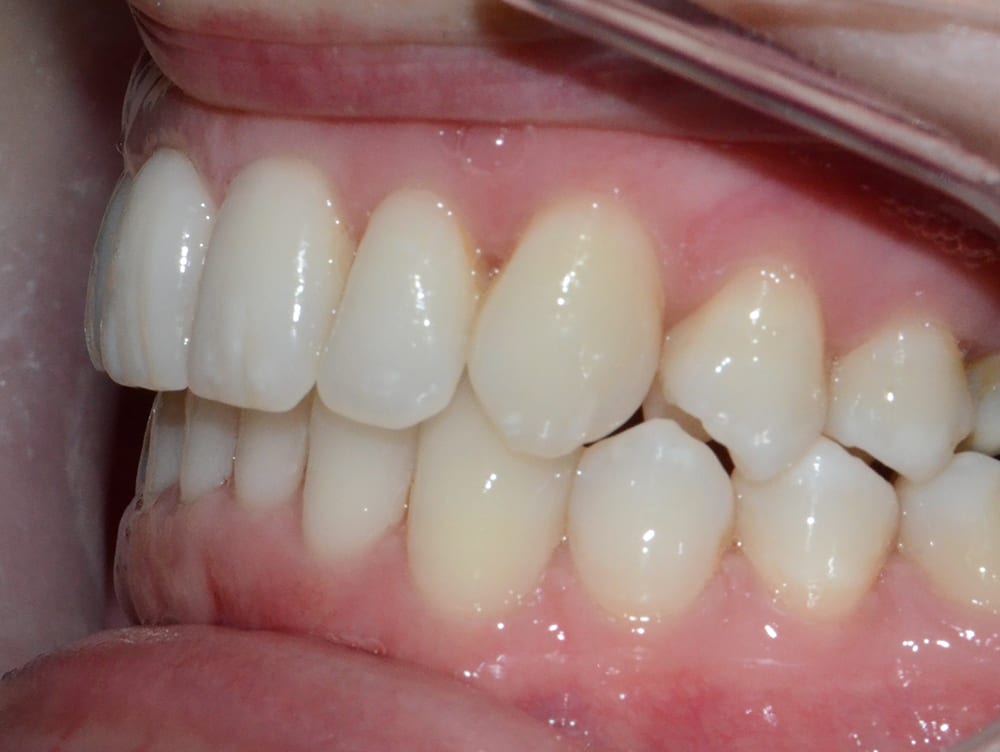 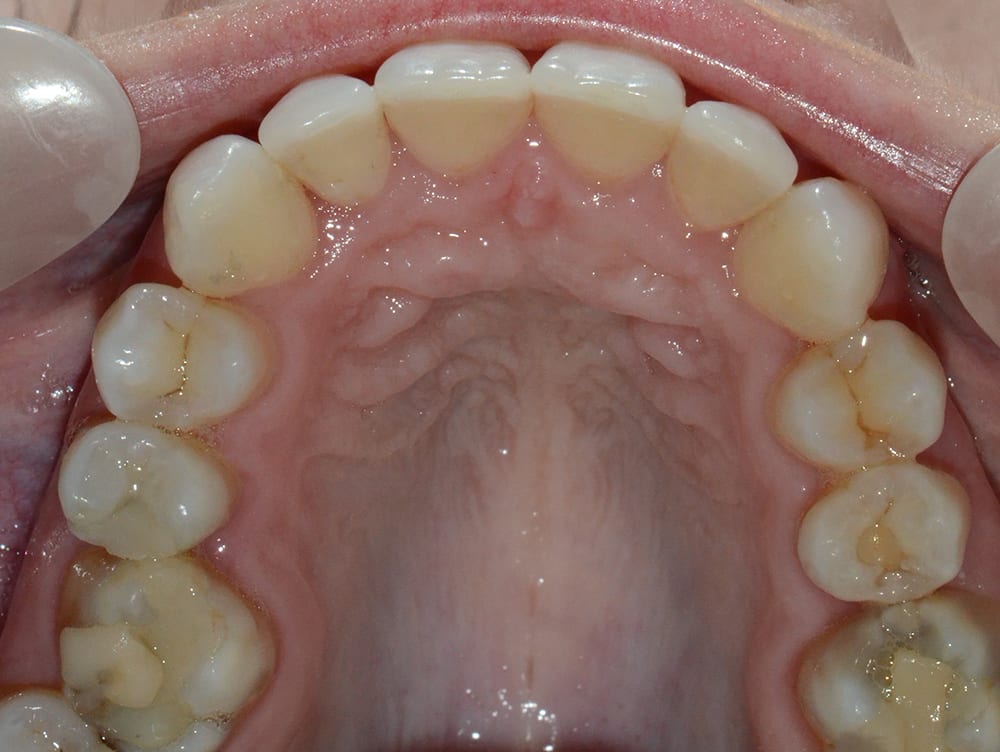 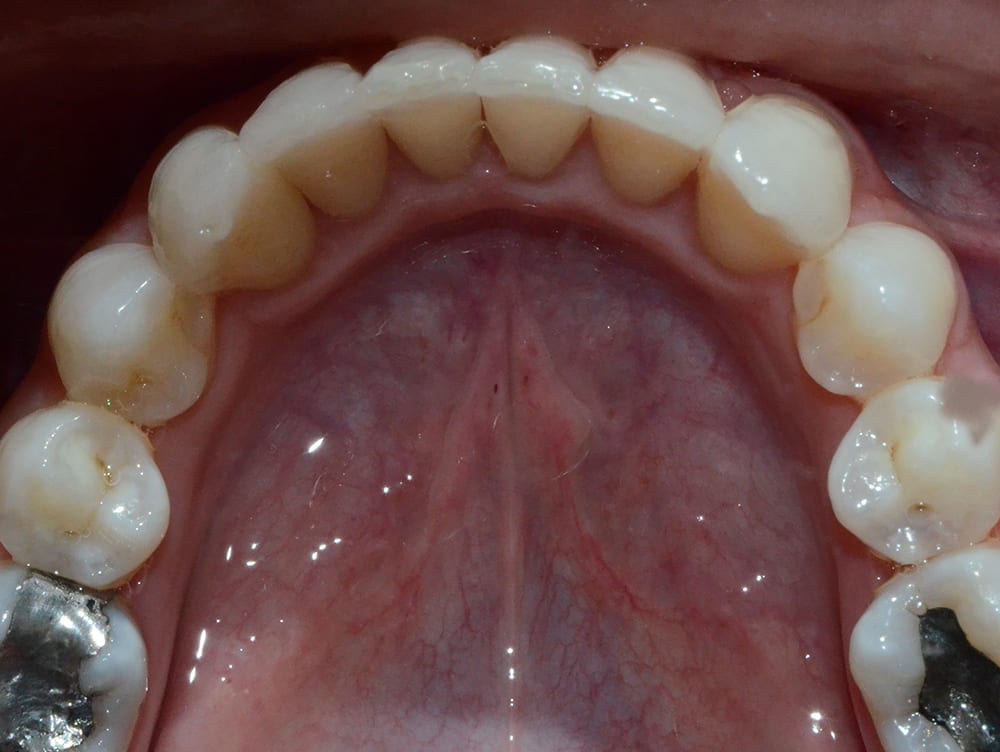